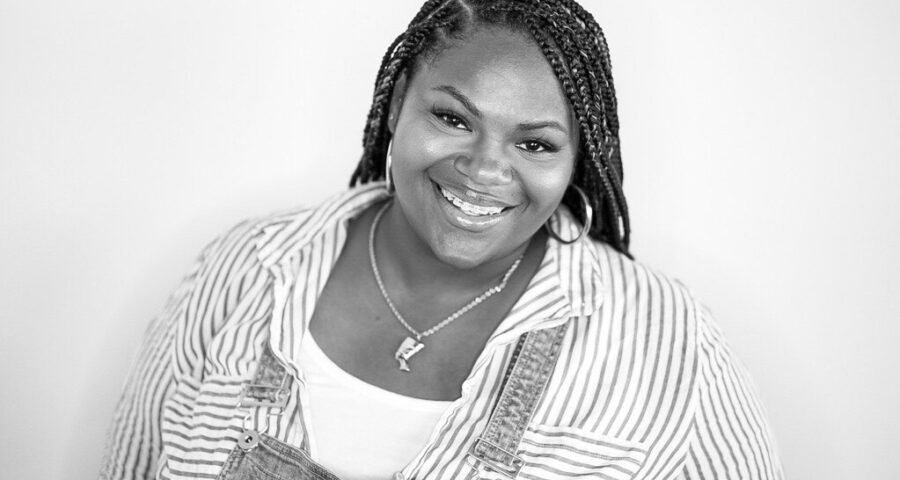 Amaria grew up immersed in nonprofits and the benefits they bring through her mother’s social entrepreneurship. Amaria’s mother was a childcare provider throughout her younger years and was active in the community. Her mother could be found often discounting her services and watching neighborhood children for free. The family regularly sponsored other families for the holidays and made Easter baskets for kids. This allowed Amaria to grow seeing the benefit that service can have on others in her community. She watched as women went from having a negative bank account balance to becoming directors for large companies – they just needed the support to make it happen. When Amaria was in 7th grade, her mother, who had recently become a social worker, passed out at work which uncovered cancer. Amaria and her family went from serving to being served.

With the stresses at home and her mother still ill towards the end of her senior year of high school, she began to skip classes gaining attention from the career counselor. Amaria had recently been selected for the Act Six program. The program is dedicated to serving emerging urban leaders through full-need college scholarships and cohort-based leadership training for those who want to use their education to make a difference at home. Amaria was a strong candidate, but her attendance was worrisome for the counselor. The counselor pulled Amaria’s forged absentee notes and called Tim Herron, Act Six founder and director to inform him.

The response was not what Amaria had expected. Tim called and asked Amaria to meet after school. The conversation was a game changer. She talked about her mother being sick and felt that Tim was truly invested in her future. She started to go to school more often with the knowledge that Tim was rooting for her, was trying to understand and help. That support and care for Amaria and her success made Act Six stand apart from other scholarships.

The support she received extended into Act Six weekly training meetings. Amaria leaned into her cadre and the Act Six training, which helped her navigate experiences she would later encounter with fellow college students in the dorms, professors, and administrators. When faced with racist or ignorant comments during her time at Whitworth University the preparation and trusted relationships were critical. Act Six and her cadre prepared her with the language and skills to de-escalate difficult interactions with others. The program helped equip her with resources and books that she still uses today.

After meeting and marrying her husband in her junior year of college, Amaria became pregnant and left Whitworth University before finishing her degree. But the relationship with Act Six has continued, and Tim continues to provide steady encouragement to finish her degree. Making her way to Oakland, California, Amaria was a stay-at-home mother for 10 years for her four children. When her youngest entered kindergarten, she decided to go back to work, starting a role at a local tech start up as an entry level customer service agent. She began to move up quickly and within three years became the vice president of client and customer success. Little did she know, Act Six training would continue to be useful in the workplace as well.

Following the death of George Floyd, her employers Culture Team met and encouraged the organization to make a statement supporting Black Lives Matter. The C-suite was slow to act, and the CEO was making posts on social media unsupportive of the movement. Amaria was reminded of a quote by Martin Luther King Jr., “he who passively accepts evil is as much involved as he who helps perpetuate it. He who accepts evil without protesting against it is really cooperating with it”.

One evening, the CEO called Amaria unhappy with her activism on social media and in the workplace surrounding Black Lives Matter going so far as to use threatening language. She resigned that Monday.

With a continued focus on service and advocacy, she found a new job at Kindest.com a nonprofit donor management software company. Working again from the ground up, her natural leadership and vision paired with the skills Act Six nurtured helped her elevate through the company quickly, and she was recently named as the company’s CEO. Under her direction, the organization is working with nonprofits throughout the nation to build and diversify fundraising using modern technology. She says, “nonprofits are those that change the lives of all of those who they encounter. If there are no nonprofits, then so many parts of our communities die”.

Amaria has taken that advocacy that was looked down on by her previous employer and put it into practice at Kindest.com. The company focuses on leveling the playing field for Black-, Indigenous-, and people of color- focused organizations. The company continues to take actionable steps to implement their support including spotlighting these organizations and providing grant opportunities for free services and fundraising support.

Using her Act Six training, Amaria has transformed her world in every space she is in, from student to vice president to CEO. She is driven to continue serving her community as her mother did before her and isn’t done yet.